Robin Norris is Associate Professor at Carleton University. She is currently the Executive Director of the International Society of Anglo-Saxonists.

Her current research interests revolve around masculinity and emotion in Anglo-Saxon literature and culture, gender and genre in Old English hagiography, Anglo-Saxon litanies of the saints, and Saint Guthlac. 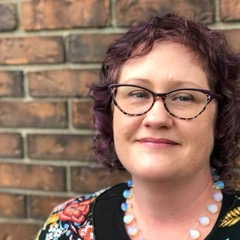 Among her many current projects, Prof. Norris is finishing a monograph entitled The Litany of the Saints and the Taxonomy of Sanctity in Anglo-Saxon England. The litany of the saints was a form of prayer that became a touchstone of Anglo-Saxon culture. Throughout the period, authors and artists employed the litanic hierarchy and its terminology to classify the saints and to conceptualize their various modes of sanctity. This was no mere commonplace but a habit of mind shared by all who prayed to the saints. When an Anglo-Saxon thought of the saints in heaven, what s/he envisioned was the litanic hierarchy. To answer questions about the saints – different types, what to call them, their relative prestige – it was to the litany that they turned. Yet very little work has been done on the Anglo-Saxon litany of the saints. Prof. Norris’ work focuses on the framework shared by all these prayers and the cultural work this structure performed in Anglo-Saxon England. For example, why are all female saints – regardless of their historical context, manner of death, or physiology – categorized as virgins? And why is the Virgin Mary deliberately separated from them within the litanic hierarchy?

In addition, Prof. Norris just finished working with Johanna Kramer (University of Missouri) and Hugh Magennis (Queen’s University, Belfast) to edit and translate twenty-two texts for Anonymous Old English Saints’ Lives. This book is now in press, to be published by Harvard University Press for Dumbarton Oaks Medieval Library. Some of her contributions will also soon appear in A Florilegium of Anglo-Saxon Women and Dating Beowulf: New Essays on Intimacy. Finally, she has recently edited a special journal issue and a collection of essays entitled Feminist Approaches to Anglo-Saxon Literary Studies.